Creamy Orange Blossom Rice Pudding with Dried Roses excerpted from Palestine on a Plate: Memories from My Mother’s Kitchen by Joudie Kalla. Photography by Jacqui Small.

Palestinian food is not just found on the streets of the Old City of Jerusalem with the ka’ak (sesame) bread sellers and stalls selling za’atar chicken and mana’eesh (za’atar and sesame bread), but in the home too; in the kitchens all across the country, where families cook and eat together every day, in a way that generations before them have always done.

Palestine on a Plate is a tribute to family, cooking, and home—old recipes created with love that brings people together in appreciation of the beauty of this rich heritage. Immerse yourself in the stories and culture of Palestine through the food in this book.

This is a celebration of real Palestinian food, cooked with the ingredients that Joudie’s mother and grandmother use, and their grandmothers used before them. Experience the wonderful flavours of Palestine through zingy fattet hummus (tangy yoghurt, chickpeas and hummus, served over toasted pita bread and drizzled in buttered pine nuts), satisfyingly spiced makloubeh (an upside down spiced rice dish with lamb neck and fried eggplant), eggplant and zucchini stuffed full with spiced and herbed lamb, and sublimely decadent awameh (honey dumplings) all accompanied by fresh mint tea and white coffee (not actually coffee at all, but a refreshing mix of water, orange blossom water and sugar).

END_OF_DOCUMENT_TOKEN_TO_BE_REPLACED 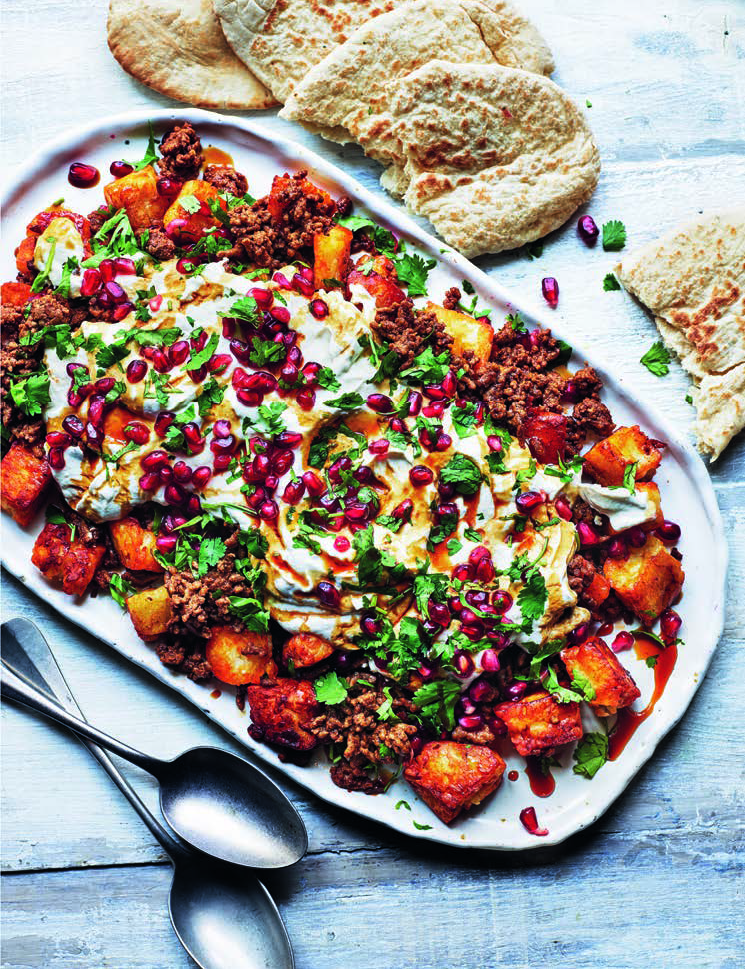 The all-new collection of more than 100 crowd-pleasing recipes for everyday eating from Sabrina Ghayour,  the author of the award-winning, Sunday Times bestselling cookbook Persiana.

Designed to ensure maximum flavour with the greatest of ease—including no-cook, quick-prep, quick-cook and one-pot dishes, Persiana Everyday is full of generous, inviting and delicious recipes to cook again and again for family and friends.

Small Plates
Including My Muhammara; Fried feta parcels with honey; My flavour bomb beans on toast

END_OF_DOCUMENT_TOKEN_TO_BE_REPLACED

Extra Good Things is all about the secret culinary weapons—condiments, sauces, dressings, and more—that can make a good meal spectacular. The abundant, vegetable-forward recipes in this collection give you a delicious dish plus that special takeaway—a sauce, a sprinkle, a pickle!—that you can repurpose time and time again in other recipes throughout the week, with limitless opportunity. These extras help you stock your fridges and pantries the Ottolenghi way, so you can effortlessly accessorize your plates with pops of texture and colour, acidity and heat, and all the magical flavour bombs that keep you coming back for more.

And this is where the fun really begins, with extras like marinated feta, featured in a dish of oven-braised chickpeas, that can then be spooned onto your favourite salad or swirled into soup. Slow-cooked za’atar tomatoes top a polenta pizza for dinner but will also make the best-ever bruschetta or pasta sauce. Or a crispy, crunchy panko topping full of ginger, shallots, and sesame that you first meet on soba noodles but you’ll want to put on . . . well, just about everything. END_OF_DOCUMENT_TOKEN_TO_BE_REPLACED

Eggplants with Chickpeas and Tomatoes excerpted from Forever Beirut: Recipes and Stories from the Heart of Lebanon by Barbara Abdeni Massaad.

Beirut, nicknamed “Paris of the East,” is the capital of Lebanon. It is the culinary capital of the Arab world, with an unmatched cuisine that has ancient roots and is influenced by several civilizations and cooking styles, including Arab, Turkish, and French. It is one of the oldest cities in the world and one of the most cosmopolitan and religiously diverse in the region. Situated on the Mediterranean coast and flanked by the majestic Mount Lebanon, it boasts an abundance of flavourful ingredients and spices, including whole grains, fruits, vegetables, and seafood.

Written by renowned Lebanese chef and award-winning cookbook writer Barbara Abdeni Massaad, Forever Beirut is a collection of 100 easy-to-prepare recipes that celebrate Beirut’s rich culinary heritage, resilience, and healing power. It is Barbara’s way of honouring the city of her childhood, her dreams, her Lebanese family kitchen, and the food that roots her. It is filled with stories and anecdotes about the customs, food, people, and traditions, with sections for soups, salads, breads and savoury pastries, mezze, kibbeh, grilling, main dishes, pickles and preserves, and sweets. With beautiful food and location photography, Forever Beirut is a must-have for cooks who love healthful and delicious Middle Eastern food. END_OF_DOCUMENT_TOKEN_TO_BE_REPLACED

In this upbeat guide to Middle Eastern vegetarian cooking, Sally Butcher proves that the region is simply simmering, bubbling, and bursting with sumptuous vegetarian traditions and recipes.

Written in her trademark engaging and knowledgeable style, Sally takes a fresh look at many of the more exciting ingredients available today in local grocery stores and supermarkets as well as providing a host of delicious recipes made with more familiar fare.

From fragrant Persian noodle rice to gingery tamarind eggplants, pink pickled turnips and rose petal jam, The New Middle Eastern Vegetarian is filled with aromatic herbs and spices, inspiring ideas and all the knowledge needed to cook wonderful vegetarian food from the Middle East and beyond. END_OF_DOCUMENT_TOKEN_TO_BE_REPLACED

Sumac. Urfa pepper. Halvah. Pomegranate molasses. Preserved lemons. The seasonings, staples, and spice blends used throughout the Middle East offer deliciously simple ways to transform food—once you know how to use them.

In FLAVORS OF THE SUN, the people behind the iconic Brooklyn market Sahadi’s showcase the versatility of these ingredients in over 120 everyday dishes, including starters, salads, soups, family-friendly meals, and desserts.

With sections devoted to recipes boasting Bright, Savory, Spiced, Nutty, and Sweet accents, it offers inspiration, techniques, and intensely flavorful ways to use everything from Aleppo pepper to za’atar with confidence.

Throughout, “no-recipe recipes” help build up your flavor intuition so you can effortlessly incorporate any of the featured spices, condiments, and preserves into your daily repertoire.

END_OF_DOCUMENT_TOKEN_TO_BE_REPLACED

Choose from a dazzling collection of thirty beautiful, well-crafted boards, whether you’re serving a group of two or ten.

Make a dinner of the Korean BBQ platter with bulgogi-style beef, lettuce cups, gochujang dipping sauce, and kimchi. Or go straight for the sweets with a dessert like S’mores Without a Campfire.

Plus, check out the party-size boards for your next holiday or celebration.

Start with the four principles for creating the right board for any occasion:

END_OF_DOCUMENT_TOKEN_TO_BE_REPLACED

When you think of Jewish food, a few classics come to mind: chicken soup with matzo balls, challah, maybe a babka if you’re feeling adventurous. But as food writer and nice Jewish boy Jake Cohen demonstrates in this stunning debut cookbook, Jewish food can be so much more.

In Jew-ish, he reinvents the food of his Ashkenazi heritage and draws inspiration from his husband’s Persian-Iraqi traditions to offer recipes that are modern, fresh, and enticing for a whole new generation of readers. Imagine the components of an everything bagel wrapped into a flaky galette latke dyed vibrant yellow with saffron for a Persian spin on the potato pancake, best-ever hybrid desserts like Macaroon Brownies and Pumpkin Spice Babka! Jew-ish features elevated, yet approachable classics along with innovative creations, such as:

Jew-ish is a brilliant collection of delicious recipes, but it’s much more than that. As Jake reconciles ancient traditions with our modern times, his recipes become a celebration of a rich and vibrant history, a love story of blending cultures, and an invitation to gather around the table and create new memories with family, friends, and loved ones. END_OF_DOCUMENT_TOKEN_TO_BE_REPLACED

Perfect for busy lifestyles, these recipes will revolutionize your meal planning, meaning you can indulge in nutritious, comforting vegan dishes every night of the week with little to no effort. With dishes for breakfast, snacks, mains and sweet treats, this is simple food that the whole family can share and enjoy together.

Vegan Slow Cooker: Over 70 delicious recipes for stress-free meals is available at Amazon.com and Indigo.ca.

This sweet and ever so slightly sour stew is rich and hearty. You could leave out whichever toppings you want to serve with it for your guests to help themselves. END_OF_DOCUMENT_TOKEN_TO_BE_REPLACED

Palestinian food is not just found on the streets of the Old City of Jerusalem with the ka’ak (sesame) bread sellers and stalls selling za’atar chicken and mana’eesh (za’atar and sesame bread), but in the home too; in the kitchens all across the country, where families cook and eat together every day, in a way that generations before them have always done.

Palestine on a Plate is a tribute to family, cooking, and home—old recipes created with love that brings people together in appreciation of the beauty of this rich heritage. Immerse yourself in the stories and culture of Palestine through the food in this book.